Another major auction featuring thousands of in an array of categories. Here are some highlights!

John Reynolds Collection – Decades-long collector John Reynolds has left behind a massive, wonderful collection that crosses many collecting genres.The fun quiet guy we always saw with a smile at trade shows intensely collected for more than 60 years. I knew him for Exonumia. But that was just part of the picture. A passionate collector, Reynolds and his wife Karen collected vintage souvenir plates (more than 300); probably had the best collection assembled of circus “side-show” and “freak” photographs and memorabilia in the country; collected anything Fresno – their hometown; and just about every aspect of Exonumia. John authored an Arcadia Press book on Fresno, coauthored by Michael Semas, and authored a number of papers on different aspects of tokens and medals, likewise contributing to other published works such as the California Trade Token Supplement, Russ Rulau’s works, and writing articles for various coin publications on tokens. He was an inveterate collector of all things Boxing. He was intrigued with early sports pinbacks.  He assembled a great California political pinback collection “just for the heck of it.” He absolutely loved shell cards, publishing a short  article on them, later used (and cited) by our friend Dave Bowers in his book on shell cards published by TAMS a few years ago that is unquestionably one of the best token references ever published.

The Reynolds Collection will take time to segregate and sell. The massive California token collection will probably be split between two or three sales, starting with this catalog. The Fresno Collection as well, though that will not start until April, 2020. The Side Show Collection will come up in April. It is massive, easily the best of its kind in America, and worthy of national exposure. The souvenir plate collection consists mostly of calendar plates from all over America. I’d guess at least 40 states are represented, with most plates from the popular period of about 1906 to 1915. It is accented with many bright colorful place-central souvenir plates, particularly from the West. John’s Postal History collection will start in April. His multi-thousand piece first flight cover collection will be a hit, as will his California and Wells Fargo covers.

The Exonumia collection is so massive it is worth discussing. If he could segregate tokens and medals into a “category”, he’d go after them – obscure or not. Much of the collection is of a western nature, as one might expect. He had collections of California trade tokens by town, including towns and tokens we’ve never seen in 40 years. He collected the Central Valley of California intensely, with what might be some of the best regional collections ever assembled. He collected California saloon tokens to a degree, but the surprise is that most of them in his collection are really rare. He had a few of the common pieces, but not very many. His California medal collection is going to cause a stir. With many pre-1900 pieces, we expect a lot of excitement from the collecting community. John had breast and lapel badges from all over California. The categories go on and on. Be sure and look through the catalog closely. This is a one time collection, as John was well known for never selling or trading a thing.

Estimating some Exonumia can be difficult in today’s world. In some cases, we will follow the lead of how we sold most of the great Svoboda (Montana) and Worthington (New Mexico) collections and start the lots at $10-15, and let collectors decide the market. While that is “dangerous” (time consumptive and expensive) for an auction company, sometimes it’s the best thing for collectors.

Stay tuned into our auctions. There is a lot of great stuff coming in the future from the fabulous Reynolds Collection.

The Benj Fauver Collection of Counter Tokens – We’ve been selected to sell Benjamin Fauver’s massive Counter collection. Counters were tokens designed to resemble US gold coinage in all denominations. Some counters are storecard tokens, others pictorial pieces generally featuring some aspect of the Gold Rush, such as the famous Dancing Bear tokens.

Our company has specialized in selling counters over the years. These tokens were made to resemble gold coinage, and as such should be highly collectible to the US coin market. Most of the counters have reverses that feature a classic US eagle reverse of American gold coins.  Fauver published a number of works on the subject.

When I was first shown the collection, I was amazed. There are more variants than I ever knew existed, many never described or noted by Fauver, Rulau, Miller or others in their important catalogs. There are not only die varieties, but mint state examples that show differences in original plating – such as silver or gold plated brass, or striking in brass only. Many of these are certainly “the finest known.” The collection is so deep, in fact, that as an example, we’ve seen more $1 counters in Fauver’s collection than I’ve ever seen cumulative in my entire career! Fauver was clearly collecting volume in order to make a scholarly study of varieties.

We’re sure you’ll love these tokens that so closely resemble US gold coins. There is not another like it anywhere.

Beginning at 8am pacific time each day

Lots can be previewed in person the day before the auction or by appointment.

Bidders can participate live in person, live online, live on the phone, or submit absentee bids online, through mail, email, phone, or fax. With many ways to bid it is so easy and fun to play!

This is a virtual version of the printed catalog. 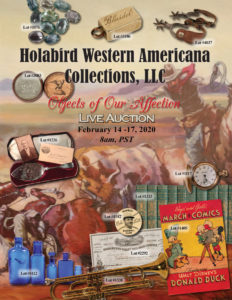 For the most current up to date photos, descriptions, and current bid information or prices realized please view our live online catalog. Click here for the online catalogs.

Sign up for our email newsletters and be notified of upcoming sales.